Share the In a previous Bicycle Safety 101 post, I mentioned the that cyclists and drivers should know the rules of the road. Ignorance of the law doesn't exempt us from following it (or get us out of any tickets). But in case you don't have time to take a bicycle safety class or work on memorizing the laws, there is another way to learn how to "share the road." Let's start with addressing the cyclists.

Cyclists - Most of you have driven a car a one point or another. You know the basics: stop at stop signs, pedestrians have the right of way, give plenty of time and signal before turning, don't run red lights, dump the road rage, drive with traffic, be aware of your surroundings and always be on the look out for potential crashes that can be avoided. Follow the rules, and you'll be a safe driver. So, when you're on your bike, things aren't much different: don't red run lights, stop at stop signs, peds have the right of way, etc. Generally, following these traffic safety basics will provide for safe experience on the road, and lessen the road rage drivers feel towards you. (Photo credit here.) 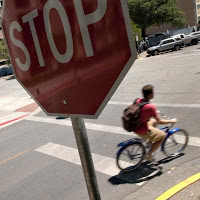 One of the biggest issues drivers have with cyclists is disregard for the law. Every time you coast through a red light, weave in and out of traffic lanes or run a stop sign, biking as a means of transportation is taken less seriously. I don't like stopping at stop signs - Stopping and starting every few blocks in an urban neighborhood is a royal pain. Rolling through that rural blinking red light is very tempting. - but they are there for a reason. As a cyclist, recognize that reason and respect it. If ya don't, ya may not get respect. So, cyclists, think like drivers: follow the rules.

Drivers - You are the majority.  In cars that are fast, convenient, good for hauling lots of people and their stuff over long distances, you rule the road. With your 1 ton mobile shelters, you win in any crash with a pedestrian, motorcycle, moped or bicycle. You had to take training (perhaps many years ago) to get a license to operate your vehicle. You know the rights and wrongs, the do's and don'ts of operating on the road. You set the tone of roadway interactions for all users.

Think about that. Depending on how you act - and react - to any situation, you will contribute to creating an environment of roadway safety or danger, calm or calamity, inclusion or dominance. Think how cyclists feel riding near speeding tons of metal, glass and plastic on a hard, rough surface with only their clothes and helmet to protect them. Combine that vulnerability with a distracted, road-raged driver. It ain't a pretty picture. (An extreme photo.) 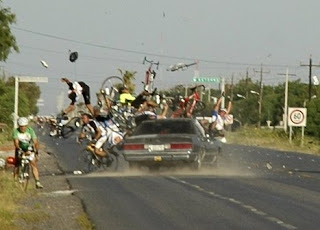 You also probably like it when there is less traffic. If there are safe biking conditions, there will be opportunities for your neighbors to hop onto a bike - and out of their car - resulting in less car traffic for you. (Or, maybe you'll even consider doing a few trips a week by bike.) Safe biking conditions include:  designated bikeways/lanes/paths/shared roadways, lower speed limits, drivers who don't run cyclists to the curb or cut them off. Support the development of these things, and it'll be a better, safe place for the community. So, drivers, think like cyclists: be aware of your surroundings.

Consider these things - talk about 'em. It's really important if communities in the Upstate want people to use the bikeways that they're building. And then there's the whole bike feasibility argument, too - no one wants a bike lane to no where. But, here's the take away message:

Create safe, convenient roadways. Work together. Cyclists, think like drivers. Drivers, think like cyclists.
Posted by Unknown at 10/18/2011 07:45:00 AM