Ever seen a bike lane to nowhere? When I see one, they tend to make me cringe. They can remind me of wasted money, a project that went awry as well as someone's poorly spent social or political capital. The lanes I'm talking about are like those see here, in the photo below. 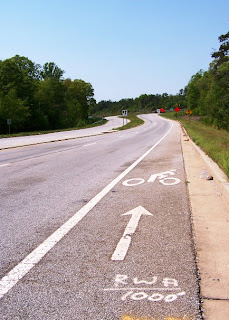 This is a photo near the intersection of highway 93 and 123 in Oconee County, just west of the edge of Clemson University. This bike lane is on highway 93. And 93 ends at 123, one of the most unbike-friendly roads in the area. You may recognize it. Eesh - what happened here!?!

Other times, apparent bike lanes to nowhere are silently pleading to be connected to a great route or become a part of some awesome, connected path, like this photo. 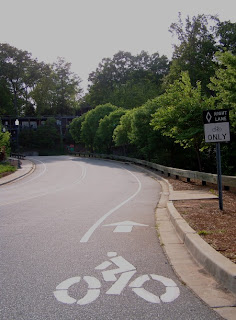 This photo is of the bike lane near the church area in downtown Clemson. This bike lane has some connectivity issues, but it's so close to really working! This lane is by itself, not technically connected to anything, but it lies between a residential area, a nearby park and a bustling downtown. This one screams "CONNECT ME WITH SOMETHING!"

Ah, the job of the transportation planner or professional. Trying to create connected routes to get people from point A to Point B, C, D, etc.

If you know of any other bike lanes to nowhere that have great potential, talk to you local planner about ways to get these babies is good, working/connected order. Maybe the plans are laying dusty on the shelf, just waiting for the right moment or momentum. Maybe the planner needs some public support at the next meeting, kind of like what's going on in Anderson right now. (The ANATS meeting passed support for the Anderson East West Greenway with full support!)

Work with local bike supporters, planners and public officials to get those bike lanes and routes connected!
Posted by Unknown at 4/27/2011 07:17:00 AM