I've been thinking a lot lately about the differences among shared roadways, bike lanes and multi-use paths. I've been thinking about it after completing a miniworkshop at the annual APBP conference, about what's best on any street, best in any given community and what may be the ideal scenario for each type of bikeways.

I'm still trying to get my head around what's the best use for each of these, and where in *insert city name here* would each of these bikeway types be appropriate. Here are some of my thoughts:

Shared roadways. Shared roadways are typically good in residential areas or neighborhoods where there's not a lot of fast moving traffic. Shared roadways or shared bike lanes are when cyclists and drivers are obligated to share the road, and it's usually denoted by signs and pavement markings. They can also be good for retrofitting an area, but that's not always going to the solve the "we need bike lanes here" problem. I also like them on wider lanes, and in areas where on-street parking either doesn't exist or is hardly used. Depending on the streetscape, though, only some users will feel comfortable using them.
Best place to find them:  Neighborhoods, city streets that are low-speed, low-traffic volume.
Worst place to find them: On high-speed (45 mph + up) rural roads. 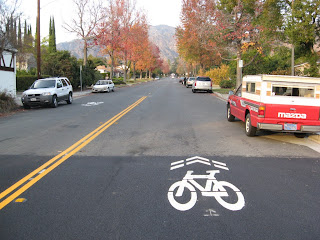 Shared Roadway with "Sharrow."
Bike lanes. These have been reshaping our roadway and bike routes for the last decade. Bike lanes - special travel lanes for those on bicycles. There are a couple of different kinds: conventional, buffered, contra-flow, left lane (think one-way streets). I think that they are generally great. They help improve cyclist safety. With the defined space on the roadway, cyclists are more visible to (and as a part of) traffic. They help legitimize biking. They're good for roads that carry a higher amount of traffic with mid-range speeds (35-40 mph). Depending on the streetscape and traffic, only some users will feel comfortable with them.
Best place to find them:  3 and 4 lane roads with speed limits of 35 mph, near neighborhoods.
Worst place to find them:  Arterial roads. Road with speeds limits posted at 40 mph, but travelled at 45mph+.

Multi-use paths. Assuming that they are off road, I like these for families, slow-moving recreational riders (as opposed to the fast-moving kind) and in communities where they're trying to improve park and recreation facilities. Sometimes multi-use paths are also called greenways. Riding on these paths can give novices confidence before taking to the actual road. I think that there should be some kind of signage and/or pavement to provide designated space for cyclists and non-cyclists (peds, skateboarders, rollerbladers, rollerskaters, etc). Rails-to-Trails paths can also fit in this category. However, experienced cyclists - racers and commuters - usually don't like to ride on these paths.
Best place to find them:  Recreational routes.
Worst place to find them:  In an area where bike lanes should be. 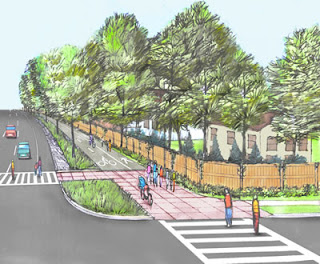 A rendering for one kind of Greenway.

A plan for another Greenway
There is another kind of bikeway - Cycletracks - that interest me, but I've yet to see them or ride on them. I don't feel like I have enough information to have an opinion on these. 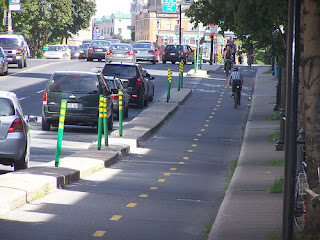 One kind of cycletrack.
So, here are some of my opinions and thoughts regarding the different kind of bikeways. Where do you see these fitting in your community - whether in the Upstate or any other state? Are bike lanes good to connect parks or are greenways better? How do families with young kids feel about bike lanes vs. shared roadways vs. off-road paths? Do experienced riders really not like riding on multi-user trails? What are your thoughts? I'd love to engage and learn more!
Posted by Unknown at 10/28/2011 04:43:00 PM