It has been a great week for bicycle planning in the Upstate! There has been a lot of public forward movement in several communities. There is much to write about, so I'm going to keep this entry short in an effort to just give the facts. The Palmetto Spokesman blog has done a great job following these leads. Make sure to follow them, too!

Greenville. A public meeting occurred earlier this week where the City's Bicycle Master plan was unveiled. 200 people showed up! To learn more about many things biking, including the planning process, and staying connected, check out this website. I haven't been able to find the plan online (yet), but this page may contain it in the future. Use your favorite search engine to check out the coverage by The Greenville News.

Easley. The City released their Bicycle and Pedestrian master plan this week in a public meeting. It's extensive, but full of good stuff. *Spoiler Alert:  download it in sections, as it's over 200 pages.*

Pickens. A public meeting is scheduled for Monday, March 21 @ 5pm @ City Hall. They'll be working on the RTP grant application and master plan. This aligns with the ideas and goals of the PELCOR initiative.

Anderson. The City's Complete Street's Advisory Committee and Great Escape Bicycles is sponsoring a bicycle master plan workshop for the City of Anderson on March 22 @ 6pm at the Anderson Recreation Center. 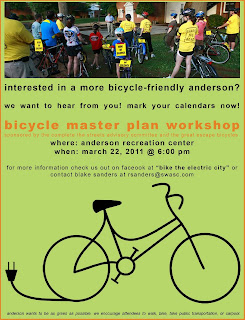 Clemson/Central. There are a few different folks who are meeting with different city officials and committees to drum up support and get these two cities to take action. There are some bicycle amenities that currently exist (the "bike lane" along 93 is one example), but there are some major improvements that need to be made before bicycling becomes safer and more accessible to a majority of the local population.

Overall, city officials, citizen activists and other champions are working together to make this a cohesive, connected movement. Things like this take time, but with any size group of thoughtful, committed people, we can make a difference. Indeed, it is the only thing that ever has.
Posted by Unknown at 3/17/2011 05:34:00 PM