I've got an axe to grind today. In light of the recent bicycle/auto crashes and fatalities that have happened across the state, there was cause for concern during my commute from Clemson to Central yesterday.

I was coming from Clemson University on 93 toward Central. As I was crossing the bridge on 93 over 76, there was a big "Road Closed Ahead" sign blocking the entire bike lane similar to the one found in the photo below. (!!!!!) 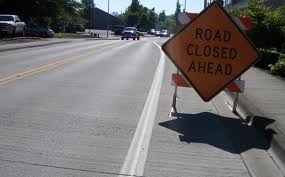 SC 93 is not the safest road to be biking on, but many do, including students. I was really upset that this sign was blocking. The bike lane. On 93. In an area of high traffic congestion.

Knowing my rights as a member of the public, I set out to alert the officials of the safety issues and engage them in a conversation about bicycle commuter safety rights and issues. I started out by contacting the City of Clemson to find out what was going on. I learned that it wasn't their project, so off to the DOT I was sent.

After five phone calls to three different offices, I got two stories on their policies and procedures. One guy I talked with (from X County) said that they don't put signs in the bike lanes. I was happy to hear this. We talked a bit about this, and I came away feeling like "my work here is done."

The other (from Y County) said that he saw nothing wrong with it, and that if he was out there, he would have put the sign in the bike lane - as opposed to the sidewalk. He said that we don't live in a perfect world, and someone's not going to be happy. (If the sign was put on the sidewalk, then a pedestrian would have called and complained.)

I talked to him about considering the fact that bicycles have a slower reaction time and farther stopping distance than pedestrians. And this area (which some might say is crazy to ride in, though there is a designated bike lane) is busy with cars, traffic lights, on ramps, off ramps and other distractions. Maybe putting this sign in the bike lane was not the right choice, considering those other factors. He also mentioned that bikes are like autos, and have rights and responsibilities to the road. Therefore, as a bicycle commuter, I had a right to ride in the car/truck/semi lane, too. Even though the road was closed, I still had a right (rights vs invites) to be there. So, the "Road Closed Ahead" sign in the bike lane didn't mean I had to stop riding my bike - I just had to take my life into my own hands - more so than I was already doing.

He wasn't biting, and we politely agreed to disagree, but I hope that, yes, another bicyclist commuter politely pushed a button that needs to be pushed. If we aren't looking out for our safety and rights...others might not be either.

Am I a little crazy to ride here? Maybe not really. If you're familiar with the area, you may know that most of the off-campus housing for Clemson students is on this route, and many use it to commute during all hours of the day and night. You may also see the bike lanes and signs, which not only (kinda) alert cars that bicyclist have a right to the road, but also alerts any potential bicycle commuter that this is a designate route - and you're free to use it. Finally, it's short ride from campus to grocery stores, restaurants, video rental places, the gym and rental housing. It's an area with a variety of use in short amount of space that could be the ideal bicycle commuting route - especially for penny-pinching students.

I came away with not being completely sure what the DOT's policies are, but I hope that my phone calls cast another ripple in the growing sea of bicycle and non-auto traffic commuters, helping build awareness that we're out there, we're vocal and we really just want to get home safely.
Posted by Unknown at 7/14/2011 04:33:00 PM