Witnessing an "Almost" Crash...that could have been avoided

Earlier today I was driving back from Clemson to Central along State Road S-39-102, which is also commonly known as the "back road" between the two cities. I was headed to Central, on Madden Bridge Road, when I almost witnessed a bicycle crash on a rural route that is marked with "Share the Road" traffic signs. 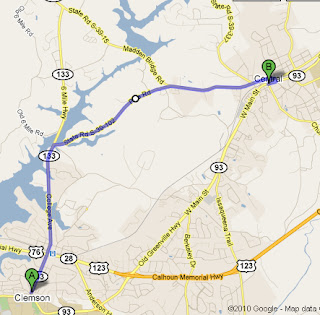 I was driving behind another car. We were both going about 40 mph. As we were coming up to a bend in the road, there was a cyclist crossing from the on-coming traffic lane into our lane. There were two cars behind him. In mere seconds, the cyclist continued his diagonal path and made it onto the grass shoulder on the on-coming traffic side of the road. But not before he nearly got hit.

This made me mad and scared. And here's why:

1. Folks are either speeding in or out of town. On the road right outside of Central, just outside of a higher residential area, automobiles tend to be traveling faster than the posted limit.  This does not create safe traffic conditions for autos, pedestrians or cyclists.

2. There are few (if any) shoulders on the roads in this part of the community. Roads without shoulders are not the safest routes for cyclists to use. In rural areas, shoulders provide more space for taking care of auto problems, cyclists and the occasional resident on foot. Even though there are a few "Share the Road" traffic signs, and therefore automobile drivers should be aware that cyclists made be using the roads, the posted speed limits of rural routes and the twists and turns of the foothills creates unsafe travel conditions.

3. The lack of knowledge of bicycle rules and safety precautions. I'm not sure why the cyclist decided to cross into on-coming traffic onto the grass on the opposite side of the road at a bend in the road, but it was not a safe or smart decision. The safer option would have been to move to the grassy area on his side of the road. Because of the actions of the cyclist, he and any of the four automobiles could have gotten into an accident.

The rider also happened to be a Special Needs individual. As I passed him slowly riding his bike on the grass after the incident, I noticed that he showed some physical signs of autism and he was riding large tricycle with a basket. (I grew up with a neighbor that had autism and rode a tricycle.) This also got me thinking about the idea that there is a lack of safe transportation options for getting around many parts of the community. And that many don't know the rules of the road for bicycles.

There is a free bus that runs along a limited route between Central and Clemson along SC 93, but it doesn't reach many of the residents, especially in the rural areas. There have been several studies conducted by bicycle advocacy organizations like APBP (Association Pedestrian and Bicycle Professionals) and universities (Deakin University in Melbourne and Rutgers University) that show that woman are an indicator species of how safe or user-friendly bicycle amenities are in a community. These studies are exploring why woman are riding their bikes less than men. Some of the studies have found that if woman are more likely to ride, then the conditions are generally safer for families, children and individuals with special needs. I have seen a few cyclists on the road, but a majority of them have been men. Perhaps if the bicycling conditions in the area were better, today's near-accident could have been completely avoided. Or if there was a better knowledge of how to bike safely and smartly, things would have been different. This is not the first time I have witnessed a horrendous mistake by a cyclist!

As communities of the Upstate begin to build their bicycle facilities, I hope that there is a campaign for bicycle safety. Many communities have started bicycle-friendly initiatives to update bicycle routes, paths and parking amenities. I hope that an education campaign or social marketing piece will be included to teach all riders and drivers rules and courtesies of the road.
Posted by Unknown at 12/29/2010 08:54:00 PM