The story goes that St. Mary appeared to a count named Ghisallo who prayed for help as he was being attacked by thieves in medieval times in Lombardy, Italy. He ran to the vision, and was saved. She became a local patroness of travel. A small church (see the photo below) was built in her honor by Count Ghisallo. Eventually, a local bicycle race included traveling by the site of the vision and church. And in 1949, an Italian priest requested that Our Lady of Ghisallo become the "official" saint of bicyclists. She has been watching over cyclists ever since. (Photo credit.) 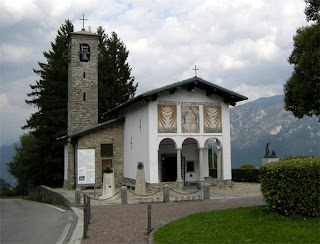 Today the church is a shrine, has a small cycling museum with photos, artifacts and stories about famous cyclists. People make a tough, two-wheel, hilly pilgrimage to the site. An eternal flame to honor cyclists for died is also at the museum. (Photo credit.) 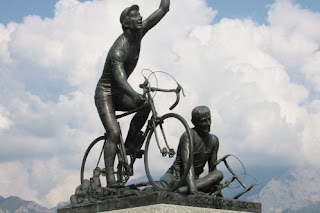 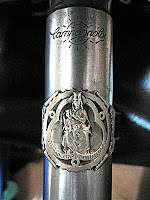 This could be a cool place to visit if you're for a cycling adventure in Italy or just a jaunt off the beaten path. I like to know that someone is looking out for me when I'm on the road. A fun bicycle story to share!
Posted by Unknown at 12/18/2011 02:08:00 PM